You don't need to own a Kindle reader to read these books! You can read them on the internet or with the free Kindle apps for your computer, tablet, or smartphone:
...The Cloud Reader is automatically there when you have an Amazon account; you’ll see it under the buy button. In Cloud Reader, the books are stored on the internet and read on the web page.
...To download free Kindle reading apps for PC, Mac, iPhone, iPod touch, Android, Windows Phone 7, BlackBerry, IPad, or Android Magnet, go here: http://www.amazon.com/gp/feature.html/ref=sv_kstore_1?ie=UTF8&docId=1000493771


WELCOME!!!
Please see above for how to read these books without a Kindle, and the sidebar at right for a quick explanation of this blog. Have fun getting new books! :) May I suggest that you check daily so you don't miss all those available for only 24 hours?

Hunkering Down: Prepping to Survive in Your Home During a Natural Disaster (The NEW Survival Prepper Guides)

“This guide … focuses on a scenario that would force you to stay in your home - a natural disaster which prevents evacuation. During a natural disaster, you might need to survive for a few days or a few weeks in your home before you can leave or before help arrives - if it ever does arrive! But don't let the "natural disaster" part of the title fool you. You might hunker down for any number of reasons. … … easy-to-read, direct, to-the-point chapters on the essentials of hunkering down. How to make sure your home is secure. Food storage and preparation. Water storage and purification. Hygiene. First Aid. Communications. It is written to help you as a new prepper get started. It's for us "regular folk" who want to make sure we are prepared. If you are ready to take those first few steps on the prepper path, this book will help you ensure your family survives, and maybe even thrives, should a disaster strike.”

End of the World Survival Guide : It's Coming... Are You Ready?

This is that author I wrote about before, who apparently has good points, but writes badly.

Alabama's Offshore Saltwater Fishing: A Year-Round Guide for Catching Over 15 Species of Fish

Just humour. An organizer for 2012, which is nearly over, but a fun read anyway with humourous bits for every week.

"Here, from New York Times bestseller historian and novelist Thomas Fleming is the story of six memorable Thanksgivings - from the first with the Pilgrims in Plymouth, Massachusetts, to the sixth celebrated in England’s Westminster Abbey." Originally from from This Week magazine, November 22, 1964. And from review: "Fleming's attempt to place a celebration of Thanksgiving in the middle of crisis events, thereby showing how the celebrants approach to being thankful for their blessings, heightens his narrative. By grounding the work in actual history, he avoids sentimentality, and unites present day readers with the cloud of witnesses who experienced difficult times and responded by showing gratitude." 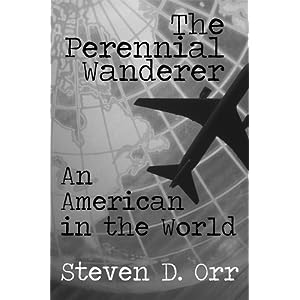 The Perennial Wanderer: An American in the World

See the review for the actual description


Nature Survival, War, and other Hardship

Her Name Will Be Faith

“Thirty years ago, the events depicted in this book were dismissed as impossible, because it could never happen. Now we know better. Hurricane Sandy proves that New York could by hit by a major storm, and Sandy’s strength never exceeded Category 2 (100 mph). Hurricane Faith is a Category 5 storm, with sustained winds of more than 150 mph, and gusts of far greater strength. Christopher Nicole and Diana Bachmann have created an unforgettable picture of the devastating forces that Nature can command, tracing in carefully researched detail the genesis of this ultimate storm from its inception off the coast of Africa to its terrifying climax. But it is also the story of the people attempting to live through it from the handsome, debonair weather expert, Richard Connors, who know what is coming but can find no one to believe him, to journalist Jo Donnelly, estranged wife of millionaire sportsman Michael Donnelly, whose relationship grows with the approach of the storm. But it also tells of the many others, rich and poor, caught up in events they do not understand and with which they cannot cope, until the devastating, heart-stopping climax as the storm strikes and the greatest city on earth is laid waste about them.”
Author “is a prolific British writer of over 200 novels and non-fiction books since 1957.”

The Voice of Thunder

“captures the experiences of two young Jewish girls who are trying to survive the 6-Day War. The novels importance stems from the fact that it raises awareness about a little known war, and the knowledge that Breen actually lived these experiences makes the work even more powerful.”

“…The answer to Jack’s dilemma lies somewhere in the internet. If he is to survive, he will first need to uncover a conspiracy which runs right to the heart of the Senate. Then he needs to figure out what to do with that knowledge which has left a trail of murders in its wake.” Three’s a video trailer for the book on the author page. Screen Conspiracy video trailer

The Reluctant Terrorist: A Novel of the American Holocaust

“presents a plausible future in which the groundwork laid by the Patriot Act, Homeland Security, color-coded terror alerts and compromises on civil liberties blossoms against America's Jews.” Great reviews.

” The murder of a friend. Conspiracy on a global scale. A near-future, dystopic world run by corporations, where nothing is as it seems and everything is part of something else. Technology and everyday life are inseparable, and information is a weapon that can save your life--or kill you.”

America Expects Every Man Will Do His Duty

“World War Three has ripped apart the world, nuclear warfare obliterating all infrastructure and technology. Those that are cursed with living must struggle and fight to bring about the Revival, the renewal of Earth That Was. One nation has thrown away their chance at Revival, seeking instead to conquer. France, lusting for glory, has unleashed warships of another age that have swept the oceans clean. England is in her sights, with America soon to follow.”

From Hell to Heaven

“an apocalyptic vision of what will happen if we continue on our present course.“

Down Home Blog Hop~Number 12
Posted by Natalia at 7:28 AM

Free Kindle books posted are usually available for 24 hours, sometimes 48, and only occasionally longer.
In order to not miss the books during their free window, I recommend bookmarking the site and checking daily, if you're the sort to remember.
If you tend to forget, subscribing will notify you of new posts. There are three ways to subscribe that I know of. All three are available on the right-hand column:
1. Using your email address. Blog readers have reported notification emails may arrive as late as the following morning, which is highly unsatisfactory for the purposes of getting these limited-time freebies.
2. Using the reader of your choice. When I tested Google Reader, it took at least an hour. Feedback on other readers welcome.
3. "Liking" Prep Utility Vehicle on Facebook. This option will give the most immediate notification (if you spend time on Facebook).
****Please double check the price before you click "Buy" for two reasons: 1. Different countries have different availability depending on how the publisher set up the book, and 2. The 24 or 48 hours of "free-ness" start at different times of day and so can go back to regular price rather suddenly too.

“Prep Utility Vehicle, and Natalia Ord, its administrator, is a participant in the Amazon Services LLC Associates Program, an affiliate advertising program designed to provide a means for sites to earn advertising fees by advertising and linking to amazon.com.”
PLEASE NOTE that the free book lists are not affiliate links and do not benefit me in any way. The affiliate links are clearly marked.

Featured at Hibiscus House, a host of Farmgirl Friday

What are your favourite sections to find books in?